True Story: a Hotel Heir, His Seductive Wife, and a Ruthless Murder at Miami Beach’s Fontaineblueu 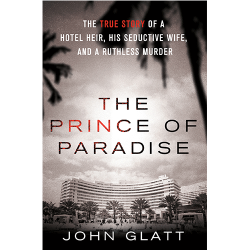 04/16/13 – Tuesday’s Topical Currents looks at the saga of the famed Miami Beach Fontainebleau Hotel, and the events which ended the lives of its “matriarch” and her son.  Ben Novack, Junior, wasraised in sumptuous Fontainebleau suites.  When the family lost the hotel, he took a second wife:  Narcy.  She was an exotic dancer who performed in Hialeah.  Years later, Narcy Novack executed a plot to kill her widowed mother-in-law and husband to gain their estates.  We’ll speak with journalist John Glatt, author of PRINCE OF PARADISE.  Tuesday 1pm on WLRN-HD1, rebroadcast at 7pm on WLRN-HD2 and audio on-demand after the live program.

CLICK HERE FOR THE INTERVIEW: WLRN Interview: True Story: a Hotel Heir, His Seductive Wife, and a Ruthless Murder at Miami Beach’s Fontainebleau 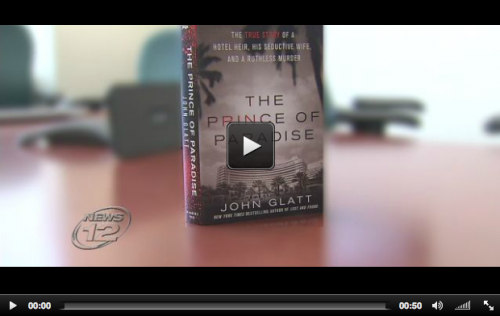 WESTCHESTER – A book chronicling the Narcy Novack murder case is due out this week.

“The Prince of Paradise”by John Glatt details the murder of hotel heir Ben Novack Jr. and exposes parts of Narcy’s hire-to-murder scheme that, according to Glatt, have never before been revealed.

Also featured in the book is a recap of an exclusive interview by News 12 with Narcy Novack while she was behind bars.

Ben Novack, Jr. was born into a life of luxury and opulence. Heir to the legendary Fontainebleau hotel, he spent his childhood surrounded by some of the world’s biggest stars, including Frank Sinatra and the Rat Pack, Elvis Presley, and Ann-Margret, who performed regularly at the Fontainebleau’s La Ronde Room. He sat by while his parents entertained presidents and movie stars, as they reigned over Miami Beach in the ‘50’s and ‘60’s, and when the family business went sour he became wealthy in his own right, founding a multi-million dollar business using connections he made at the Fontainebleau.

But Ben, Jr.’s luxurious, celebrity-studded lifestyle would end in another hotel room—a thousand miles away from the one where he grew up—when police found him bound up in duct tape, beaten to death.

Seven years earlier, police found Novack in an eerily similar situation—when his wife Narcy duct-taped him to a chair for twenty-four hours and robbed him. Claiming it was a sex game, he never pressed charges and never followed through with a divorce. Now prosecutors claimed Narcy let the vicious killers into the room and watched as they beat her husband with dumbbells. They also suspected she was involved in the horrendous death of Novack’s mother, just three months before. But it would be Narcy’s own daughter who implicated her to the police—in this twisted case of passion, perversion, and paradise lost.